The E37Z-Hero from Ceado is a revolutionary all-purpose coffee grinder that caters to the true enthusiast. A variable RPM motor, 83mm DLC coated burrs, and zero retention make this the ultimate single dose grinder.

Members earn 2% back in Latte Rewards:
Get 11000 Points on this product. Sign in or Sign up now!

The Ceado E37Z-Hero marks a new class of grinder that's been a long time coming, and we're more than excited to carry it. To put it simply, the E37Z-Hero is a zero retention grinder that excels at single dose grinding. With its DLC-coated burrs and grinding chamber, as well as a 45° incline, you can expect any retention of grinds to be completely eliminated at both input and output. If any grinds remain, they can be forced out via the bellows attachment and spring-loaded dispensing chute. With grind retention becoming more and more important as a variable for an excellent extraction, this is an incredible step forward.

The heroism doesn't stop there, however. You can make infinitesimal grind adjustment with the E37Z-Hero's interlocking worm gear, which can be unlocked and removed to make large macro adjustments should you ever feel the need to switch between brew methods. To that end, you can expect minimal time and coffee wasted while dialing in. The control box houses the rest of the magic, letting you start and stop grinding, toggle the cooling fan, and adjust the RPM of the burrs (a particularly fascinating surprise for us). As a nice, final touch, the portafilter hook beneath the dispensing chute can be easily removed to make room for various pour-over devices.

With the E37Z-Hero, Ceado's mission is to give you everything you need to "explore like a hero." To that end, Ceado provides you with a set of three tinted single dose bottles, a misting bottle (to eliminate static), a portafilter funnel, and a coffee journal to record your brewing results. This grinder is all about the journey to discovering your best, and it gives you everything you need to achieve that. Don't be surprised if you feel a particular sense of courage with the E37Z-Hero on your counter.

To ensure minimal retention of coffee, the burrs and grinding chamber have been coated with DLC (diamond like carbon) to reduce friction and prevent grounds from sticking. The inclusion of the bellows attachment and spring loaded chute allow you to remove any remaining grinds from the grinding chamber. As a final measure, the 83mm burrs are designed with no surface screws to further reduce retention.

In a first for Ceado, you can now vary the RPM of the burrs as the grinder operates. Able to be adjusted, the RPM is another variable to explore when dialing in for shots and other brew methods.

Enjoy precision, uniform grinding for all methods of coffee preparation. Equipped for both micro and macro adjustment, large jumps from coarse to fine grinding aren't just possible, they're encouraged. For drip or brew preparation, the portafilter spouts can be removed to make way for drippers, French presses, and other vessels.

Wood, aluminum, and steel combine to create a distinctive aesthetic that sets the E37Z-Hero apart from other grinders. The unique combination of materials lends the grinder a modern appearance, tempered by the organic warmth of the wooden accents. 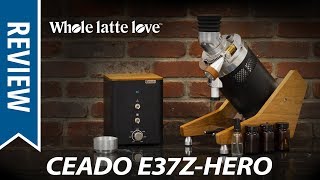 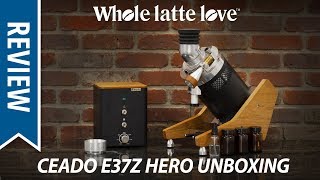 Ceado's E37Z Hero is the most advanced coffee grinder on the market. It grinds for all brew methods with a variable RPM motor and zero retention.
Read More