Members earn 2% back in Latte Rewards:
Get 5870 Points on this product. Sign in or Sign up now!

The Matrix DE is a sight to behold and a beast to brew with. Just like on the MN model, the Matrix DE can morph from one color to the next to accommodate shifting tastes, using the touch screen display. From the display you can also control the brew and steam boiler temperatures by adjusting their respective PIDs, and, unlike the MN, a third PID automatically regulates the temperature in Bezzera’s specially designed, electronically heated group head. Within a few clicks you can program the machine to turn on and off at particular times, change from reservoir to plumbed operation, and instruct the machine to backflush itself. A major upgrade from the MN version is the Matrix DE’s volumetric brewing capability. You can program four different shot volumes or brew manually, because Bezzera is all about options and we are here for it. They also let you choose between plumbed and reservoir operation, and, another new addition, choose which boiler has priority during heat up. Or, you could just program your Matrix DE to turn on automatically before you wake up so it’s ready to brew by the time you’re ready to stand.

The Matrix DE features the same automated pre-infusion as found on the MN model, and operation is the same. Brewing is easy using the intuitive push button and toggle operation; each function designated by a stylized icon. Steaming too, the Matrix DE’s steam wand toggles on for powerful steaming, and flipping it up locks it into place for an uninterrupted stream. You can get really amazing shots on-demand if you dial in the pre-infusion and shot times, or experiment by brewing manually depending on your mood, which, we assume is linked to whatever the color of your machine is that day. The Matrix DE is a knockout. We’re not sure if an espresso machine has ever looked this good. If you’re thinking it’s fun, but a bit too flashy for your taste, the Bezzera DUO DE shares all the same amazing features; or, if you love it but want a more traditional brewing experience, the Matrix MN is a sure bet.

The Matrix DE offers you total control with triple PID thermostats. You can regulate the steam boiler within a range of 212°F to 266°F, and the brew temp within 190°F to 204°F. The temperature of Bezzera’s proprietary group is also maintained by a thermostat. Grant priority to one boiler over the other during heat up, or allow them to default to alternating priority. 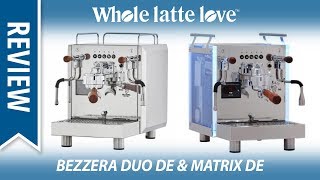 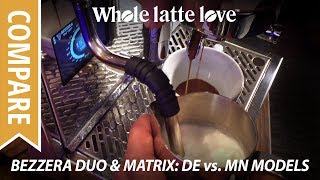 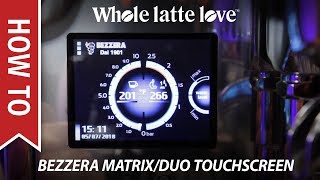 The Bezzera Matrix DE: A Review of This Luxurious Dual Boiler Machine

Powered by
ask a question
write a review
5.0 star rating 1 Review
(1) (0) (0) (0) (0)
Show all reviews
Thank you for posting a review!
We value your input. Share your review so everyone else can enjoy it too.
share
share
share
Thank you for posting a review!
Your review was sent successfully and is now waiting for our staff to publish it.
Thank you for posting a question!
Please click on the link in the confirmation email we just sent you to submit your question.
Your question will appear on the site once someone answers it.
write a review
ask a question
Updating Results
J
James W. 5 star rating
01/19/19
The Matrix is my Bright Spot
Review by James W. on 19 Jan 2019 review stating The Matrix is my Bright Spot
I have had the Bezzera Matrix DE for a couple of weeks now. I moved from a Breville Oracle Touch.
In a true sense this is the real thing - I direct plumbed the unit using a Flojet 5000 and with an attached drain connection what a wonderful improvement. A very solidly built machine and works excellently. With pre-infusion and volumetric dosing - my Expresso's have never tasted better. Enjoyed working with WLL and I know they will be there if I need help!! Thank you!!
On Bezzera Matrix DE Dual Boiler Espresso Machine
share ' Share Review by James W. on 19 Jan 2019 facebook facebook Share Review by James W. on 19 Jan 2019 twitter twitter Share Review by James W. on 19 Jan 2019 LinkedIn linkedin Share Review by James W. on 19 Jan 2019
01/19/19
Was this review helpful? 4 0
Slideshow
Slide controls
Loading...
Powered by
J
Jeff H.
Verified Reviewer
10/12/19
Q: Does the specified 16.5” height include the rails on top of the machine? Along the same lines what is the total clearance height required when the hinged reservoir fill door on the DE Matrix is opened?
Answers (1)