The JURA J80 is a best-in-class super-automatic espresso machine that boasts one-touch brewing of 11 specialty espresso drinks. Programmability is simple and quick using the large, full color display, and the J80 delivers delicious drinks mere minutes after powering up.

Members earn 2% back in Latte Rewards:
Get 2798 Points on this product. Sign in or Sign up now!

The J80 super-automatic is an impressive one-touch machine capable of brewing and steaming up all your favorite espresso and milk-based drinks, such as: an espresso, ristretto, long coffee, latte macchiato, or cappuccino. Also available, for hot cocoa or tea lattes, are hot water and milk foam features, which can be programmed to produce a custom amount of water or frothed milk. Each drink can be customized depending on your personal preferences, across five strength settings, two brew temperature settings, and coffee volume to taste. JURA’s Fine Foam Frother allows you to adjust milk density with a quick twist of a dial before, or during, brewing. For us at the office, this control is critical and makes the difference between a latte macchiato and a cappuccino incredibly clear. JURA’s integrated Intelligent Pre-Brew Aroma pre-infusion system fully saturates grounds before brewing to ensure you get the best possible extraction out of the espresso. Our favorite subtle, but important feature is the 16 gram brew group adjustable across five strength settings for a true double shot of espresso. Not many super-automatics can boast this same brew group size outside of the JURA line.

The J80 is also incredibly easy to use. A rotary dial cycles through options on the color, LCD display, allowing you to easily select a drink to personalize or brew. Brew one to go with the J80’s extra tall 6” spouts. Conveniently, it’s as simple to keep clean as it is to brew with. Install the Clearyl Blue water filter in the J80’s 2 L reservoir to ensure great tasting coffee and reduce the need for descaling. As on all JURA machines, the cleaning cycles on the J80 are completely automated, and a warning pops up on the screen to let you know it’s time for a little maintenance. All you have to do is add the designated cleaner and press start and the J80 cleans its own brew group, milk system or descales the boiler system. If you like the J80, but would prefer a machine with a couple extra drink options, the J6 is an excellent alternative; for a one-touch machine with a smaller footprint, we recommend the A9.

The Variable Brewing Unit lets you prepare your drinks with anywhere from 5-16 grams of coffee, and JURA’s Intelligent Pre-Brew Aroma System pre-infuses those grounds before brewing to ensure the best possible extraction. You can also make adjustments to the coffee temperature and volume for each individual drink using the menu.

Coffee is ground fresh for each drink by a multi-level conical burr grinder. The bean hopper features an aroma-preserving lid to let you safely store up to 8.8-ounces of whole bean coffee. The machine is also equipped with a bypass doser which allows you to fill the brew group directly with pre-ground coffee, an excellent option when brewing decaf coffee.

The J80 is equipped with JURA's Fine Foam Frother, which automatically siphons and steams fresh milk for a latte macchiato or cappuccino. Before or during use, you can spin the dial on the frother to adjust the texture according to the drink and your preferences. The J80 prompts you to rinse the milk circuit after each use to keep it clean and ready for the next brew.

The JURA J80 automatically displays maintenance alerts when the brew group needs cleaning or the machine needs to be descaled. The milk system has an automated cleaning cycle, and rinses after each use. Water hardness can be programmed in for more accurate maintenance feedback, and the Clearyl Blue water filter preserves water taste and prevents scale build up. 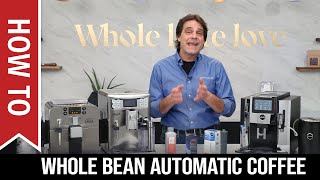 How To: Get Best Results From Whole Bean Automatic Coffee Machines

We are glad you like your Jura! two great tricks for making your coffee hotter are:

1. To pull a blank shot first (to warm the spouts up!)
2. Pre-heating your cups. (This can be done by using the hot water spout to fill your cup with piping hot water. Dump said water in the sink and then make your drink into your nice warm mug!)
12/28/18
Was this review helpful? 0 0
Slideshow
Slide controls
Loading...
Powered by
M
Matt B. 5 star rating
12/16/18
Love it! My new favorite toy!
Review by Matt B. on 16 Dec 2018 review stating Love it! My new favorite toy!
I love coffee but am incredibly lazy about making it. My dream is to wake up, hold my hand in the air, and have the coffee cup fall into it. Probably thats not going to happen, alas. But this is truly the next best thing. I did a great deal of research into super automatics and was frankly reaching a point where I was spinning in circles. Every time I found a machine I thought made the most sense, I'd read reviews saying that it didn't make coffee hot enough or it stopped frothing milk after a week, the brew unit quickly gummed up, or something else. I stumbled onto an article that made the case for buying refurbished super-automatics, arguing that they are a way better buy than a new machine. I typically prefer to buy new for a variety of reasons. But this made sense, particularly given the dramatic mark-downs on refurbs. I found Wholelattelove via their very helpful youtube videos and consistently high customer reviews (of the store). I settled on Jura because it seemed like, on average, people tended to argue that they make the highest quality machines. I also noticed that most of the high-end boutique stores in our local mall were selling Jura more than any other brand they sell. I talked with several sales people at those stores and they confirmed that most of their customers prefer the Jura's and relatively few come back with complaints. So I had a couple of online chats with the folks at Wholelattelove. They were impressively patient with my many questions and argued that most of the complaints were from people who don't properly clean their machines, use oily beans, or expect the coffee to be the temperature you'd get from a traditional drip machine. I picked the J80 in particular because of the features. I liked the visual representation of the drinks for my family and the impressive variety of drinks it offered. It has a larger-than-average water tank (72 oz I think?) and a pretty good sized bean hopper (8.8 oz). It worked perfectly out of the box (and DID come with the necessary accessories -- water filter, cleaning tablets, tube for milk, connectors) despite the fact that, oddly, both Jura and Wholelattelove told me it would not). After a few milk drinks, however, it stopped working. Coffee was still fine, but the frother just blew steam. I cleaned and cleaned with no effect. I was worried that maybe the critics had been right. So I contacted Jura and they first told me to clean the brother, which, as I said, I had done repeatedly. But then the tech suggested pinching open the little rubber piece at the end of the cap on the frother and "gently" sticking a paper clip or toothpick into the opening. She said that this piece can stick together if milk gets stuck inside. That instantly did the trick. It has been working trouble free since then, about two weeks of making 4-8 drinks per day (between myself, my spouse, and our oldest daughter). I do clean it religiously. Every night I run the milk cleaning process with the cleaning solution. I then manually rinse all the frother parts and tubing. That seems to be the key. It takes 3-4 minutes, but so far seems to be working great. I bought the Jura cool control unit (34 oz basic) so that we'd have milk on hand. I also read lots of critical reviews of that device. It too has worked perfectly for us. Granted, I've only had the whole set-up for about three weeks. So we will see how it performs over the long haul. I should mention that the coffee is as hot as I would expect from a machine like this: plenty hot; not as hot as the hottest drip machine I've ever had -- so perhaps not hot enough for everyone -- but by no means merely "warm." The milk is a very nice froth at roughly the same temperature as I get at Starbucks or Pete's. I would challenge anyone to tell the difference between this refurb and a new machine in terms of physical appearance. It looks utterly brand new in every respect. So the bottom line is that I'm a very satisfied customer. I love the machine. As long as continues to work as it is today, I will continue to be very happy with it.
On Refurbished JURA J80 Matte Black One Touch Automatic Espresso Machine
share ' Share Review by Matt B. on 16 Dec 2018 facebook facebook Share Review by Matt B. on 16 Dec 2018 twitter twitter Share Review by Matt B. on 16 Dec 2018 LinkedIn linkedin Share Review by Matt B. on 16 Dec 2018
12/16/18
Was this review helpful? 0 0
Slideshow
Slide controls
Loading...
Powered by
B
Bobbie U. 5 star rating
08/01/18
Great
Review by Bobbie U. on 1 Aug 2018 review stating Great
We bought this Jura to replace our older model. It has more options and is more efficient.
On Refurbished JURA J80 Matte Black One Touch Automatic Espresso Machine
share ' Share Review by Bobbie U. on 1 Aug 2018 facebook facebook Share Review by Bobbie U. on 1 Aug 2018 twitter twitter Share Review by Bobbie U. on 1 Aug 2018 LinkedIn linkedin Share Review by Bobbie U. on 1 Aug 2018
08/01/18
Was this review helpful? 0 0
Slideshow
Slide controls
Loading...
Powered by
1 2
Back to Top
Get the best perks...