The Ceado E6P V2 is a professional quality burr coffee grinder with 64mm burrs and programmable timed grinding functionality. Its stepless adjustment makes for near infinite grind settings when dialing in your grind, which is perfect for a home or commercial environment.

The E6P V2 is an upgrade to Ceado’s E5P model. As opposed to the manual, push and grind functionality of its predecessor, the E6P V2 can be programed to dispense a single and double shot on demand. Just like the E5P, the E6P has a powerful 300 watt motor that lends itself to high performance. It quickly dispenses grinds through the coffee chute, which features an internal flap specifically designed to break up any clumps before the grounds deposit evenly into your portafilter. We were very pleasantly surprised at how effective this flap is at its job, so much so it barely needs the included excess grounds tray. To adjust the grind size, it’s simply a matter of making small turns on the adjustment collar since the E6P is a stepless grinder and can, essentially, be adjusted infinitely. Two adjustable dosing buttons, one for singles, the other for doubles, can be programmed to dispense grounds for a certain amount of time within 1/10th of a second for highly precise measurements. You also have the option to grind manually for even greater functionality. We think this is a big step up from the E5P in terms of convenience.

We’re floored by Ceado’s innovative attention to detail when it comes to the design of their grinders. The E6P, like all Ceado grinders, is safeguarded against accidental blocks with a high capacity overload switch, which cuts the grinder’s power so as to avoid any damage. A new design element on the E6P is the adjustable portafilter holder, which can fit any size portafilter and hold it snug for hands free operation. Our favorite feature, though, has to be Ceado’s Steady Lock Burr technology. This design keeps the burrs at a constant distance apart from one another, whether they’re grinding for one shot or one hundred. This means that grinding with the E6P produces seriously consistent results. If the E6P sounds great, but you’re not interested in the timed grinding, the Ceado E5P is manual and shares many of its features; or, if you prefer a doser grinder, the E6X may be the grinder for you.

As a stepless grinder, the Ceado E6P V2 boasts near infinite grind settings, because, rather than being limited to a designated number of settings, the adjustment collar slides unimpeded. This grants you access to all the possible settings, rather than choosing a a few for you.

The Ceado E6P V2 is capable of dispensing a single or double shot at the press of a button. Both buttons are programmed to dispense by time, within 1/10th of one second. For added functionality, manual grinding is also available.

In order to ensure high-performance in commercial environments, the Ceado E6P V2 grinder has been fitted with overload protection safeguards that prevent accidental blocks caused by external agents or operating errors. 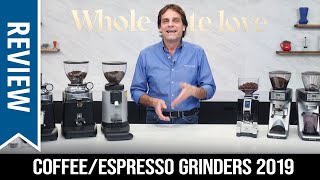 Favorite Coffee and Espresso Grinders of 2019

Explore a wealth of content related to this product and learn everything you need to know before you buy. Ceado's E6P is a programmable electronic doserless coffee grinder that is engineered to produce fluffy grinds quickly and to hold up under rigorous...
Read More We discuss everything you need to know when choosing a coffee grinder and suggest some of our top picks for beginner’s and budget-minded baristas.
Read More The holiday season is a time for friends and family to come together and show their appreciation for one another. The problem is that finding gifts...
Read More

So you got into home espresso with a single boiler machine. It was relatively cheap and easy but after using it for awhile you’re tiring of the wai...
Read More

Thank you for submitting your question and thank you for the feedback! The grinders are the same as far as their grind range and capabilities are concerned, which is really for espresso. We have updated the website to reflect this.
Was this answer helpful? 0 0
01/20/20
S
Stefan
Verified Reviewer
02/25/20
Q: The Ceado website now shows the E6P with slightly different design and a touch screen. Is this a regional difference, newer or older version than seen in your videos?
Answers (1)

Thank you for submitting your question. The ones currently listed on Ceado's website are the newest iterations of the E5P and E6P, we do not currently have these in stock yet.
Was this answer helpful? 0 0
02/27/20
Back to Top
Get the best perks...