The ECM Elektronika II Profi is a heat exchange machine made with the best parts available for results that impress. The Elektronika II Profi's switchable water source and pre-programmed volumetric controls make this espresso machine an interesting compromise between automation and control.

Members earn 2% back in Latte Rewards:
Get 5098 Points on this product. Sign in or Sign up now!

When the ECM Elektronika II Profi was revealed to us, we were immediately intrigued by it's preference for automatic controls. Dedicated volumetric brewing buttons are something you don't really see in the prosumer market, where manual control is key. However, considering ECM's philosophy on innovative design, it's no surprise something so bold could arrive.

With the Elektronika II Profi, you can expect ECM's signature features: dual-pressure gauges, an E61 group, joystick water valve controls, and a sleek housing with rounded edges. The rotary pump works in combination with the Elektronika II's sound-absorbing design to make brewing nearly silent as well.  However, the real convenience is found in the array of volumetric controls, which automatically dispense pre-programmed volumes of espresso and can be reprogrammed to your preference. We've found this to be especially handy when making lattes; just press a button to brew and forget while you get to work steaming your milk. Because brewing is automatic, you won't need to keep an eye out on your espresso while you froth.  For when you want a little more control, manual brewing is still an option.

This is a great machine for anyone who has guests who may not be as experienced with pulling a shot, or busy bodies that want to get other things done while your drink is prepared.

The Elektronika II Profi is equipped with a 1400 W stainless steel boiler with a capacity of 2.1 L. As a heat exchanger machine, you can expect to brew and steam without waiting, or even at the same time.

With the flip of a switch, the Elektronika II Profi can choose which source of water is being used, between the reservoir and a direct water line connection. The reservoir boasts a capacity of 3 liters.

The E61 grouphead is constantly heated with water from the thermosyphon system for temperature stability. It also features a pre-infusion cylinder to aid in the extraction process.

The machine is housed in mirror-finished, stainless steel panels. It rests on a one-piece internal steel frame, which protects it from bending or bowing during shipping or as the result of continuous use. 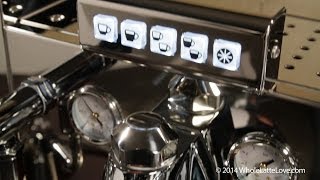 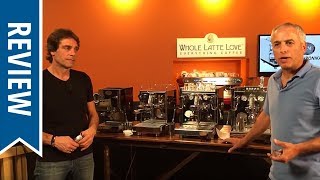 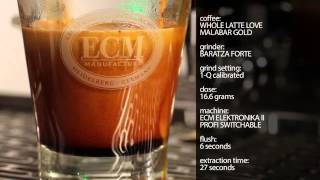 Powered by
ask a question
write a review
5.0 star rating 4 Reviews
(4) (0) (0) (0) (0)
Show all reviews
Thank you for posting a review!
We value your input. Share your review so everyone else can enjoy it too.
share
share
share
Thank you for posting a review!
Your review was sent successfully and is now waiting for our staff to publish it.
Thank you for posting a question!
Please click on the link in the confirmation email we just sent you to submit your question.
Your question will appear on the site once someone answers it.
write a review
ask a question
Updating Results
R
Richard Z. 5 star rating
03/22/19
outstanding machine
Review by Richard Z. on 22 Mar 2019 review stating outstanding machine
i’m really impressed with my elektronika, super quiet, easy to use, easy to set up. had an issue after following the preliminary instructions, but 1 call and it’s running perfectly. i guess the plunger on the boiler was stuck open as i was told. instruction booklet was easy to understand and follow. what s great machine! now to tweek the volume and timer along with my grind to get the perfect pull. great videos on the elektronika, i watched them all, and sold me on this major purchase. very informative and detailed. thanks for the great service, along with replacing the ecm cups that were damaged, you guys are tops in customer service.
On ECM Elektronika II Profi Switchable Espresso Machine
share ' Share Review by Richard Z. on 22 Mar 2019 facebook facebook Share Review by Richard Z. on 22 Mar 2019 twitter twitter Share Review by Richard Z. on 22 Mar 2019 LinkedIn linkedin Share Review by Richard Z. on 22 Mar 2019
03/22/19
Was this review helpful? 1 0
Slideshow
Slide controls
Loading...
Powered by
A
Aaron 5 star rating
01/22/18
Remarkable machine
Review by Aaron on 22 Jan 2018 review stating Remarkable machine
I purchased a refurbished Elektronika 1st generation over a year ago. I have owned at least 8 different espresso machines including the Rancilio Silvia, some Saeco semi-automatics, and too many others that I care to admit. With all these different machines, I have a pretty solid backgroud in the progressive upgrades. I can absolutely, positively tell you that the ECM machines are rock solid performers. I can't think of one thing I would change about this machine. Most of our beverages are milk-based and this was a frustration with most other machines I have owned where they just don't have the steam output. Single boiler machines are a chore with the heat up and cool down cycles between frothing and brewing. The heat exchanger in ECM machines generates plenty of steam any time I need it with no waiting. I'm not talking about just enough steam, either. It's there when I want it with plenty of reserve. I absolutely love the levers instead of dealing with knobs. I find them so much easier and ergonomic than knobs. The E61 brew group is an industry standard that is very consistent and reliable. The rotary pump is rare on consumer/prosumer machines and it is far quieter than any of the other machines I've owned.

The chassis is superlative. The frame is heavy duty. The shell is a heavy guage sheet steel similar to what's on the outside of your car, not that junky glorified foil or plastic that looks like stainless. The chrome plating is absolutely gorgeous! This is never going to rust. Some things are just built to last a lifetime and beyond and this is one of those.

Whole Latte Love
11/17/17
That's a really cool coffee bar you've put together! Your guests must be pleased to visit. We're glad our videos were able to help you make a decision, as well. Be sure to keep checking in, because we're always doing something new and you might happen to stumble on something that really interests you.

Thanks for leaving your review!
11/17/17
Was this review helpful? 2 0
Slideshow
Slide controls
Loading...
Powered by
R
Rochelle B. 5 star rating
11/13/17
Best damn cappuccino ever!
Review by Rochelle B. on 13 Nov 2017 review stating Best damn cappuccino ever!
We received our ECM Elektronika II about 8 months ago. We called up and spoke with Mark and placed our order. Delivery was very fast and everything came in perfect. After watching many videos on various machines and reading countless reviews, we finally decided to take the plunge and buy this one. What a great decision. We weren't sure whether to get a dual boiler or a heat exchange unit, but Mark answered all of our questions, and this one fit the bill. I think the deciding factor was the ease of using a button versus a lever to make our brew. It was easy to program the perfect amount of brew time to get the right amount of espresso for our soon to be cappuccinos. The heat exchanger works fine, we can brew and froth our milk at the same time. If we were to make one comment on the design, it would be to add a low water level light somewhere. The unit shuts off if the water gets too low. It's really not too bad though, we just check the water prior to brewing every time. Or we could just hook it up to a continuous water source, although the local water isn't the best for coffee. We use distilled water with third wave water mineral supplement added. The coffee tastes great. I really like Lavazza Crema e Gusto for my cappuccinos and my wife uses a pure Jamaica Blue Mountain and Melitta blend for her morning brew. We also purchased a bottomless portafilter for 2 reasons. First, it has taught us how to properly grind and tamp the coffee. And second, it allows us to use a big cup for our double sized cappuccinos. We couldn't be any happier with our decision to purchase this machine as well as buying from whole latte love.
On ECM Elektronika II Profi Switchable Espresso Machine
share ' Share Review by Rochelle B. on 13 Nov 2017 facebook facebook Share Review by Rochelle B. on 13 Nov 2017 twitter twitter Share Review by Rochelle B. on 13 Nov 2017 LinkedIn linkedin Share Review by Rochelle B. on 13 Nov 2017 Comments (1)
11/13/17
Comments by Store Owner on Review by Rochelle B. on 13 Nov 2017

Whole Latte Love
11/13/17
Beautiful bar set up and do I see palm trees! We just got our first snow of the year.
11/13/17
Was this review helpful? 0 0
Slideshow
Slide controls
Loading...
Powered by
Back to Top
Get the best perks...