Members earn 2% back in Latte Rewards:
Get 3000 Points on this product. Sign in or Sign up now!

The Breville Dual Boiler BES920XL espresso machine has been improved so that it no longer meets but exceeds the “Gold Standard” for making great espresso. Breville defines four key elements that dual boilers and state-of-the-art electronic controls should maintain control over: limiting maximum extraction pressure, low pressure pre-infusion, consistent extraction temperature, and simultaneous extraction and steam. With one boiler just for espresso and dual electronic PID controls, (proportional–integral–derivative), the BES920XL delivers temperature controlled pre-heated water to the boiler, producing precise water temperature for an ideal extraction every time! Added temperature control over the steam boiler has been included, allowing you to adjust between 265 - 285 degrees Fahrenheit, allowing you to fine tune steaming pressure.

The Breville BES920XL Dual Boiler features not one, but two PID controllers. One is working on the brew boiler, and the second one is on the grouphead, not the steam boiler. This temperature control delivers precise water temperature for optimum espresso flavor and is user programmable to achieve optimal espresso flavor. The steam boiler is controlled via a thermistor control. This focus on maintaining temperature extends to the commercial grade grouphead which has an embedded element for optimal thermal stability during extraction. This machine also has two pumps. One is a 15 bar Italian pump with over-pressure valve (OPV) protection and delivers water at the optimum maximum extraction pressure of 9 bars. The other one is a less than 3 bar pump exclusively used to feed the steam boiler. That means no pressure problems at the grouphead should the auto-fill decide to trigger for the heat exchanger boiler while you are pulling a shot. Finally, a user programmable low pressure pre-infusion feature gradually increases water pressure to gently expand grinds for an even extraction.

That said, there's still much more to this machine for the coffee geek. Programmable pre-infusion duration and pre-infusion power with manual override; a temperature display in either °F or °C; and preset/manual-override/programmable shot volume. An optional Auto Start setting preheats the machine at a programmed time; a top-fill 84 oz water tank ensures easy access; and the dedicated hot water outlet makes it faster to pre-heat cups or prepare an Americano. There is also a shot clock and pressure gauge to help you improve your barista skills over time. All you'll need are some freshly ground beans and a bit of practice to rival the best café. Brevile has also included their patented 58mm twist blade, allowing you to precisely level off your portafilter for consistent extraction. It might be the last thing you want to think about, but maintaining your machine has never been easier thanks to the new descale alert and assisted descale procedure, which help you to keep your machine in top condition for increased performance and lifespan. If that wasn't enough, Breville offers a 2-Year limited product warranty on the BES920XL. 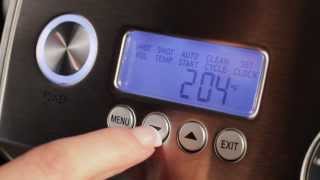 What’s the top of the line in home semi-automatic espresso machines? Well, that’d be a dual-boiler machine with PID temperature control. So today w...
Read More

Whole Latte Love
01/03/18
Thank you for your review! We're sorry to hear your machine was damaged during shipping. Even if the damage is solely cosmetic, it shouldn't have happened and indicates that the box may have taken quite a big hit. In this case, we have to file a damage claim to the carrier within 5 days of it's arrival, so we've reached out to you to get this taken care of.

Please, contact us if you need any help.
01/03/18
Was this review helpful? 0 0
Slideshow
Slide controls
Loading...
Powered by
J
JC P. 5 star rating
11/12/17
Solid System, Fantastic Coffee
Review by JC P. on 12 Nov 2017 review stating Solid System, Fantastic Coffee
I purchased this to replace an aging Gaggia Baby Twin that had finally failed. After 5+ years with the Baby Twin I knew every quirk and trick of how it worked and could get it reliably produce very respectable cappuccinos every day.

Enter the BES920XL. The front pressure gauge meant it only took about 6 shots to dial in my grind coarseness and tamping pressure to get the consistent 9 bar extraction pressure that was recommended. We did still sample all of the shots(just in case we found an alternate sweet spot) while dialing the system in but in the end the recommendations seemed to produce the best results. I'm very much a numbers person so having data like shot length, extraction pressure, coffee weights, and final beverage weights made the tuning process quite fun.

For those that don't want to do all that, the unit comes with a tool called "The Razor" which is a puck trimming tool. You simply fill the basket with ground coffee(overfill as that's kind of the point to the trimmer), tamp of the puck as you would normally and then insert and twist the razor tool to shave the puck to the correct thickness for the unit. It was very quick and easy to use, but produced a slightly stronger extraction than we like. That method did produce consistent flavor results, though ,so it's worth trying as it was quick and easy.

The steam wand might be my favorite feature. It's a triple hole head and having the dedicated boiler means the steam is kept at the right temperature and there is plenty of steam available. I was a bit worried about the learning curve after using the Gaggia turbo frothers for so many years, but it took only a couple tries to get comfortable with it and by the time I had the brewing settings sorted I also had the wand doing what I needed. The only word of caution is that the pressure is strong and the 3 hole head churns the milk heavily, so be careful in smaller pitchers and bring the pressure up slowly. Otherwise you will end up with milk everywhere. The results are fantastic once you get used to the pressure and using that style of wand.

My least favorite feature is the hot water dispenser. It works just fine, but given the 10-15 min warm up time for the unit as a whole, it's usually not worth it to get hot water for tea. If the unit is already up and running then that's a different story.

The unit exterior is plastic but it is still quite heavy. It feels solid and well made. The unit has a set of retractable wheels that are activated with a knob under the drip tray. I thought this was an odd feature until I needed to clean some spilled grounds from under the unit. Now I think it is very clever and works well to allow cleaning, or rotation to get to the water reservoir in the back without having to lift the unit. It does require a bit of counter-space to maneuver. Other tools provided like the tamper and the wand cleaner work perfectly fine and store either in the bay(for the tamper) or the tool drawer under the drip tray. I have a Rocket tamper as well, have used both with the unit(both 58mm), and have gotten the same results so I'm only using the Breville one now.

The only con so far is that the pumps on the initial boiler filling are a bit loud. Under normal use the system is about on par with others, but the initial fills are louder than I would like. The unit has an auto-start feature, but instead of waking up to warmed up system, I suspect you'll be awoken by the pumps as unit starts up. This is not enough of an issue to deduct any points though,.

I've only had the unit for about a week so I can't comment on long term durability or how the maintenance cycles work. But so far so good and I'm completely happy with the purchase.

Whole Latte Love
11/13/17
Thanks so much, for the kind words and your review both! We think you'll be very happy with your Breville. Now that you're on the brewing path, feel free to ask us for recommendations or advice on coffees. We have everything you'll need to know and, based on a few of your preferences, we can pick out something special for you. You can reach us at 888-411-5282 or customerservice@wholelattelove.com.

Keep experimenting with coffee. We hope we can help you find the best that espresso has to offer!
11/13/17
Was this review helpful? 1 0
Slideshow
Slide controls
Loading...
Powered by
Back to Top
Get the best perks...