Rocket is a stickler for detail and the Appartamento really highlights that fact. Its hyper stylized steam and hot water knobs feature an easy grip gear design and Rocket’s iconic “R”; the wide feet resemble espresso pucks, and the laser cut side panels reveal a rose gold underbelly, all of which is rounded out by a striking mirror finish. Like any Rocket fan, we’re in love with the aesthetics on this compact machine. 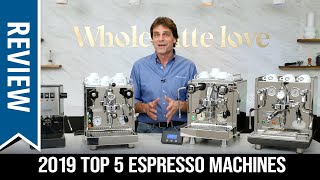