(not including tax + shipping)

Rocket is a stickler for detail and the Appartamento really highlights that fact. Its hyper stylized steam and hot water knobs feature an easy grip gear design and Rocket’s iconic “R”; the wide feet resemble espresso pucks, and the laser cut side panels reveal a copper or white underbelly, all of which is rounded out by a striking mirror finish. Like any Rocket fan, we’re in love with the aesthetics on this compact machine.

Rocket Espresso’s patented cool-touch technology ensures that the steam wand is safe to use, since only the nozzle gets hot. The heavy-duty wand has a two-hole tip and is engaged with a large ergonomic control knob at the top of the wand. The machine is at steaming pressure when the gauge measures around 1 bar.

The Appartamento comes equipped with an electronic microprocessor controlled automatic low-water-level sensor that will automatically shut off the machine to prevent a dry boiler. A warning system will also alert you when the 2.5 L water reservoir needs to be replenished. Use a water softener in the reservoir to increase the length of time between descales. 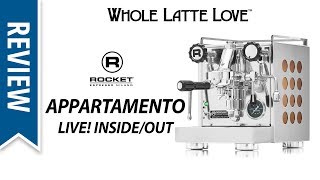 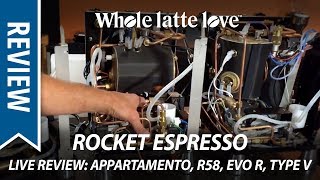