A unique offering from Bezzera, the Strega is a traditional, lever-operated heat-exchange machine with pressure profiling capabilities, which stands tall and proud when the lever is fully extended. Find out what it truly means to pull a shot on the Bezzera Strega.

Members earn 2% back in Latte Rewards:
Get 5032 Points on this product. Sign in or Sign up now!

The Bezzera Strega is an old school lever-style espresso machine that pays homage to the very first espresso machine invented by the company’s founder Luigi Bezzera all the way back in 1901. Ever the innovators, though, Bezzera takes inspiration from a classic lever machine without getting stuck in the past. They’ve integrated both a hydraulic spring and vibration pump to ensure even pressure and offer control over pre-infusion. The Strega was intimidating to some of us, and it does take practice to get the process down, but, the adventurous among us found the Strega to be as fun as it is capable. As a heat exchange machine, it is capable of brewing and steaming simultaneously once you’ve got your shots down, and it can even be plumbed directly into a water line. Bezzera’s specially designed group head electronically heats up to make sure the brew water is never shocked by a cold component, though it will need to be flushed between uses, as the group can heat up a little too much. The Strega allows you to step back in time and experience what it’s truly like to pull a shot.

Using the Strega is tricky at first, but, once you get the hang of it, it’s totally worth it. One of the key benefits to brewing with the Strega is the unique way in which it controls both temperature and pressure. The high temperature of the copper boiler helps to properly heat the puck for a full extraction while the stored heat in the lever group allow for slightly lower finishing temperatures that prevent over-extraction. Similarly, the pressure produced by the machine trails off as well. The pump provides an initial 11 bar followed by the lever spring that starts around 9.5 bar and tapers to about 5.5 bar at the end of the shot. Remember to guide the lever up, because it will snap up quickly, and, we can tell you from experience, it hurts. For milk drinks, the Strega can produce roughly 45 seconds of steam time before needing to recover. The steam wand features a commercial style 4-hole tip that speeds up milk frothing and can require a bit of a learning curve for those who aren’t used to steaming so quickly.

As opposed to modern push button or toggle brewing, the Strega is a throwback to espresso yesteryear with its traditional lever group. Assisted by a pump, the machine pre-infuses and brews by pulling down the lever and gradually releasing it. This style of machine originated the concept of pulling a shot.

Most machines deliver constant pressure over the course of a brew cycle, but the Strega’s lever and pump design allows you to modify the pressure manually while brewing the shot, simply by holding and releasing the lever. Regular use gradually tapers the pressure from 9.5 to 5.5 bars as the lever spring rises back to the top. 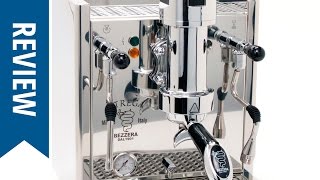 Today we’ve got the Bezzera Strega. It’s a lever machine but there’s a lot more to it than that. It has a vibration pump as well. By manipulating t...
Read More

Powered by
ask a question
write a review
5.0 star rating 2 Reviews
(2) (0) (0) (0) (0)
Show all reviews
Thank you for posting a review!
We value your input. Share your review so everyone else can enjoy it too.
share
share
share
Thank you for posting a review!
Your review was sent successfully and is now waiting for our staff to publish it.
Thank you for posting a question!
Please click on the link in the confirmation email we just sent you to submit your question.
Your question will appear on the site once someone answers it.
write a review
ask a question
Updating Results
J
John S. 5 star rating
02/24/19
Upgrade from La Pavoni
Review by John S. on 24 Feb 2019 review stating Upgrade from La Pavoni
Owning a La Pavoni lever machine is like owning an old Fiat Spider - you always have to tinker with it. While my machine was down, I decided to upgrade to the Bezzera Strega. I am glad I did. It is a precision device. My shot consistency is great now with every pull. I like the standard sized portafilter as well. I manually calibrated my grind and basket size using methods of Matt Beynon (Wogan Coffee) and found that a 22 g load was spot on. First shot was great. Now experimenting with special profiling with the lever. Love this machine. 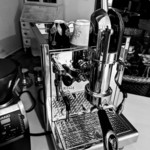